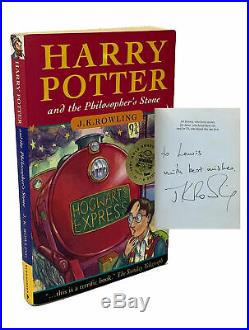 Harry Potter and the Philosopher’s Stone. Title: Harry Potter and the Philosopher’s Stone Publication: London: Bloomsbury, 1997 Edition: First Edition. First edition, twenty-third printing, paperback issue. Signed and inscribed by Rowling to the dedication paper: To Lewis/ with best wishes/ J. Original publisher’s pictorial paperwraps by Thomas Taylor of Harry and the Hogwarts Express to front board and of a wizard with brown hair to rear cover. A fine copy with a trace of wear to the corners, 1997 Gold Award Winner gold sticker to front the cover and a small former owner sticker to the front inside cover. First published in 1997, Harry Potter and the Philosopher’s Stone is the first book in the Harry Potter heptalogy. It introduces both Harry and readers alike to the secret, magical world of witches and wizards in Great Britain. It also sets the stage for the six subsequent novels by familiarizing readers with the villainous Lord Voldemort and how his and Harry’s fates are inevitably intertwined. Although often regarded as a children’s novel, Harry Potter and the Philosopher’s Stone topped adult reading charts in the UK, and in the United States, where it was published under the alternate title Harry Potter and the Sorcerer’s Stone. Notably, the first printing of this book in hardcover format is exceedingly rare; only 500 copies were printed, of which about half ended up in libraries. Despite its small print run, the book was an immediate success, and went through dozens of print runs within the first few years after publication. Subject: 20th Century Literature, British Literature, Children’s Literature, Fiction, Illustrated Books, Signed Books, Women’s Literature. B & B Rare Books, Ltd. They founded B & B from diverse academic backgrounds and their shared love of literature. Book Appraisals, Book Binding & Repair. Whether you’re collecting within a specific genre, time period, author, or decorating your home, we offer custom services to build your home library. We offer complimentary gift wrapping, gift bags, and tote bags. We look forward to making your gift extra special. All items are guaranteed to be as described. This listing was created by Bibliopolis. The item “J K Rowling / HARRY POTTER AND THE PHILOSOPHER’S STONE Signed 1st Edition 1997″ is in sale since Monday, June 8, 2020. This item is in the category “Books\Antiquarian & Collectible”. The seller is “book-hive” and is located in New York, New York. This item can be shipped worldwide.