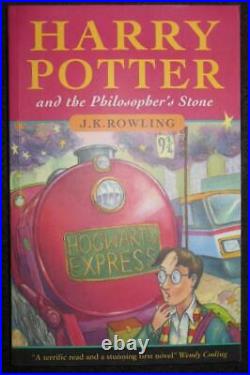 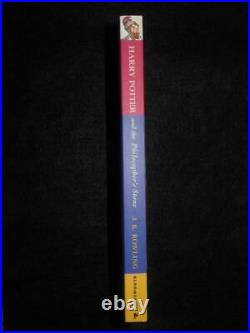 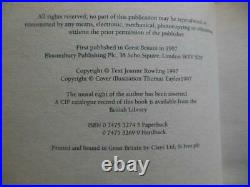 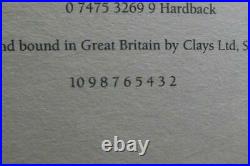 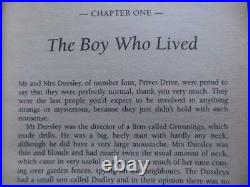 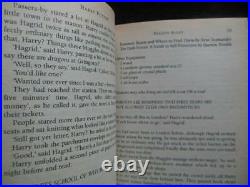 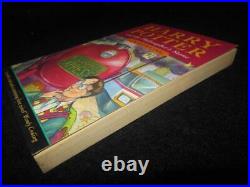 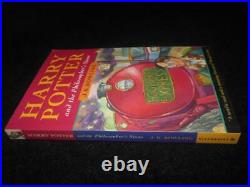 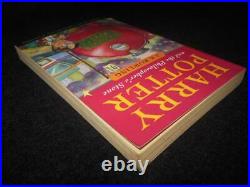 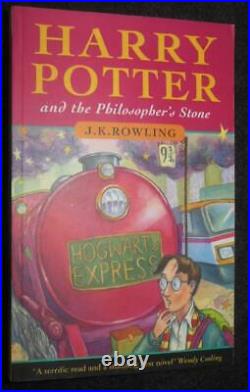 HARRY POTTER AND THE PHILOSOPHER’S STONE (2nd Bloomsbury Printing) J. Published by Bloomsbury Publishing, London, 1997. No Jacket (as issued). Second impression, following on from the first impression the same year. Not to be confused with the book club, Australian, Ted Smart or Canadian editions, but the rare true first edition, second printing Bloomsbury edition with the number string on the colophon of 10 9 8 7 6 5 4 3 2. Includes the points; Wendy Cooling review to the base of the front board, the publisher page credits Joanne Rowling and contains no space between the’r’ and’1′ on Thomas Taylor 1997 in error. In Vg+ condition with only very minor wear to the edges and a hint of age toning to the pages, a little dusting to the closed edges. Free of any previous owner’s names, inscriptions, etc. Cover colours still as vivid as when the book first appeared nearly a quarter of a century ago. A very rare title in uncommonly good condition. Harry Potter and the Philosopher’s Stone is a fantasy novel written by British author J. The first novel in the Harry Potter series and Rowling’s debut novel, it follows Harry Potter, a young wizard who discovers his magical heritage on his eleventh birthday, when he receives a letter of acceptance to Hogwarts School of Witchcraft and Wizardry. Harry makes close friends and a few enemies during his first year at the school, and with the help of his friends, he faces an attempted comeback by the dark wizard Lord Voldemort, who killed Harry’s parents, but failed to kill Harry when he was just 15 months old. The book was first published in the United Kingdom on 26 June 1997 by Bloomsbury. It was published in the United States the following year by Scholastic Corporation under the title Harry Potter and the Sorcerer’s Stone. It won most of the British book awards that were judged by children and other awards in the US. It has been translated into at least 73 other languages, and has been made into a feature-length film of the same name, as have all six of its sequels. J K Rowling – Harry Potter and the Philosopher’s Stone (1997) Bloomsbury 2nd Ed. Please also await an invoice if purchasing a’Courier’ item. Please base your DSR for Dispatch time on this, and not the transit time, which is out of my control. Items are described as accurately as possible, but if you think I have overlooked anything please drop me a line. This excludes foxing, previous owner’s names or inscriptions, etc. Any negative points, such as missing or torn pages are usually noted on the relative listing. I would rather my customers be pleasantly surprised than bitterly disappointed. Please note that heavier items are not able to be sent to PO Boxes by UK Couriers. New: A new book, never used. Fine (F): Should have no flaws, a perfect copy of a used book. Mint: Another term for Fine. Near Fine (NF): May show a small flaw, such as shelf wear, but nearly perfect and unread. Very Good (VG): The broadest category for used books, this describes any average used book. May have small flaws, and has probably been read, but should appear overall clean and attractive. Good (G): Will probably have significant wear or damage, although is still intact. Suitable for reading, but not necessarily a good gift copy. The old saying in bookselling is good ain’t good. Fair: Another term for Poor or Reading Copy : Heavily worn or damaged, a poor book will be readable but not attractive. Binding Copy: This will be the complete pages of the book, but the binding has been broken or damaged to the point it will need professional rebinding. Get Supersized Images & Free Image Hosting. Create your brand with Auctiva’s. Attention Sellers – Get Templates Image Hosting, Scheduling at Auctiva. The item “J K Rowling Harry Potter and the Philosopher’s Stone (1997-1st/2nd) Bloomsbury” is in sale since Sunday, July 18, 2021. This item is in the category “Books, Comics & Magazines\Antiquarian & Collectable”. The seller is “blofieldbooks” and is located in Norwich. This item can be shipped worldwide.