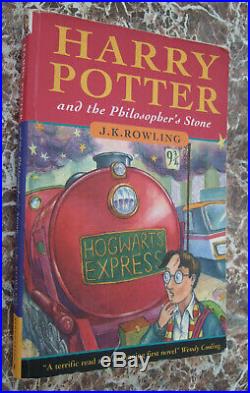 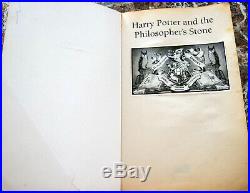 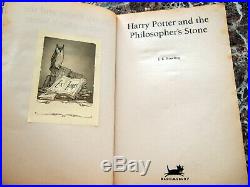 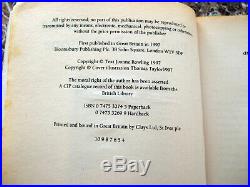 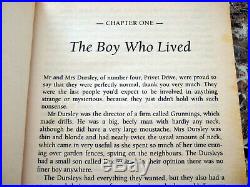 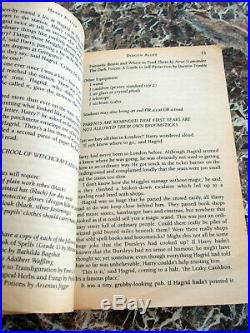 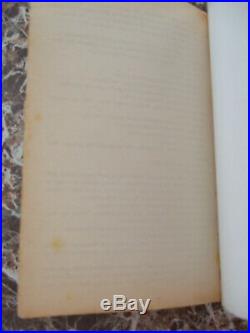 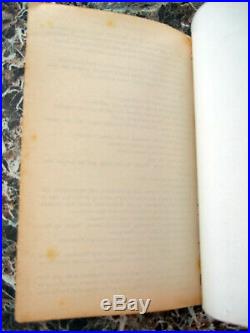 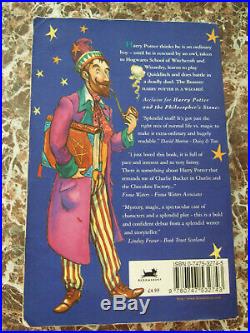 Arry took the wand. He felt a sudden warmth in his fingers. He raised the wand above his head, brought it swishing down through the dusty air and a stream of red and gold sparks shot through the dusty air and a stream of red and gold sparks shot from the end like a firework, throwing dancing spots of light on to the walls. Hagrid whooped and clapped and Mr. Ollivander cried, Oh, bravo! Yes, indeed, oh, very good. Her e we offer an extremely early and rare stated first paperback edition, 4th printing, of the classic novel, Harry Potter and the Philosopher’s Stone , known in the US as… Sorcerer’s Stone, by J. Rowling, published by Bloomsbury, London, in 1997. Also included in the sale is an attractive collection of ephemera: a laminated map of Hogwarts Castle, Harry’s Hogwarts acceptance letter with necessaries list, and a train ticket to Hogwarts. There is much to be learned about collecting this title and much disinformation, even in the media. For instance: the “1 wand” misprint on page 53 is NOT an indication of an early edition it is corrected in some true 1997 printings–like this copy–and it can be found in books printed a decade later. Another: If the book is dated “1997” it is not necessarily a 1997 printing (look, instead for mention of subsequent Harry Potter books). The earliest first “point, ” or feature, identifying a first edition found in both the hardback and softcover version of Philosopher’s Stone is the inclusion of a quote by children’s author Wendy Cooling at the base of the front cover illustration, reading A terrific read and a stunning first novel. This copy we offer here, being a very early 4th printing, DOES have that extremely rare, early, and sought-after quote. It also features the very rare absence of any mention of any subsequent Harry Potter books. Pictorial laminated rear board features a brown-haired, rather than white-haired wizard. Page 15, line 3: Potters son was corrected to Potters son in later editions. Page 17, line 31: Ill be takin’ Sirius his bike back was corrected to Id best get his bike away in later editions. Page 31, line 34: Stray apostrophe not yet removed from before Harry could see.. Page 87, line 31: Hogwarts, a History was corrected to Hogwarts: a History in later editions. Page 168, line 9: Dittany in One Hundred Magical Herbs and Fungi was corrected to Dittany in One Thousand Magical Herbs and Fungi in later editions. Wraps have typical wear, including a small half-inch edge tear at the base of the front cover that I’ve secured with a bit of acid-free binder’s tissue. Pen mark on inside front cover. Hogwarts and owl-themed bookplates at both sides of front half-title page please see pics. Light spots to edge of text block. Very tight and square binding, very clean, bright, and crisp text. The book measures approximately 7.75 x 5-inches. This will make a wonderful addition to your collection or a marvelous gift. Have you seen all the amazing first and rare editions of iconic books we offer? — other auctions of classic antiquarian literature and special gifts! Thank you for your interest! The item “First Edition! Harry Potter &the Philosopher/Sorcerer’s Stone, 1997Wendy Cooling” is in sale since Wednesday, August 7, 2019. This item is in the category “Books\Antiquarian & Collectible”. The seller is “iconicfirsts” and is located in Bronx, New York. This item can be shipped worldwide.