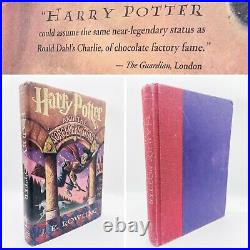 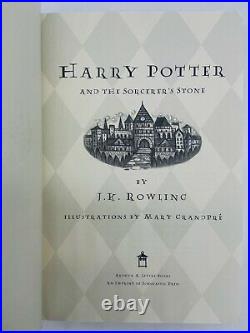 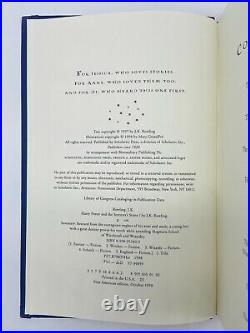 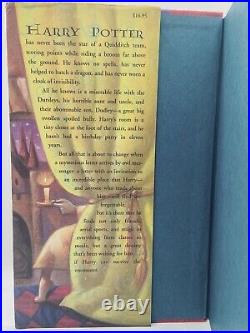 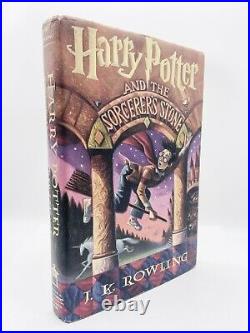 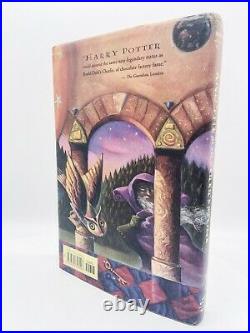 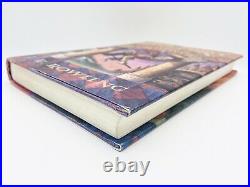 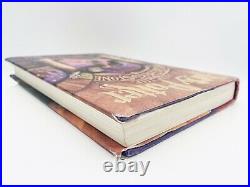 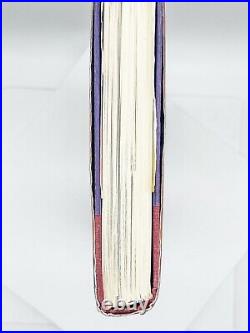 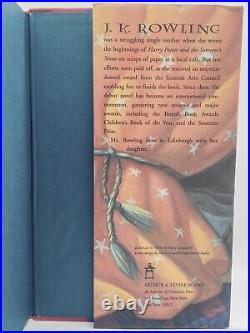 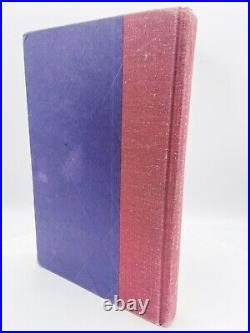 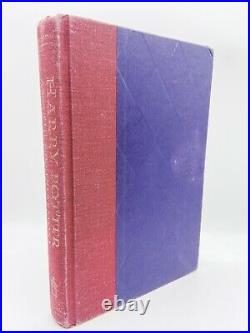 Harry Potter and the Sorcerer’s Stone. Octavo, quarter bound red cloth with purple diamond-embossed paper and dark teal paste downs. First American Edition, Second Printing of J. Rowling’s first novel, Harry Potter and the Sorcerer’s Stone, one of only three books in history to sell more than 100 million copies with subsequent titles all exceeding the 50 million mark. A true piece of modern literary history that will undoubtedly stand the test of time. A wonderful example issued in the highly collectible FIRST IMPRESSION DJ with The Guardian, London, review on the rear panel. Originally published by Bloomsbury in the UK in 1997, Harry Potter and the Philosopher’s Stone set off a literary epic that would envelop and change children’s literature for the 21st Century. Following its immediate success abroad, the First American Edition was published by Scholastic Press in 1998 with “Philosopher’s” changed to Sorcerer’s. The first book of a seven-book series, the title quickly captured the imagination and admiration of children and adults alike, and would go on to win countless awards in literature. The writing has been compared to that of Jane Austen, one of Rowling’s favorite authors, or Roald Dahl, whose works dominated children’s stories before the appearance of Harry Potter, and of the Ancient Greek story-teller Homer. It has been translated into several languages and its film adaption became one of the highest-grossing movies of all time. Very Good Plus Book in Fine Dust Jacket. Book Binding tight with moderate slant. Boards clean with some signs of wear. Front panel corners worn with quarter inch tear to bottom right. Mild fading to hinges and head/foot of spine. Internally clean and unmarked with crisp text. Very mild chipping to top panel corners at creases. Bright, unfaded illustrated panels and spine. FIRST IMPRESSION points including “The Guardian London” review on rear panel, J. First Issue DJ Criteria. The dust jacket back has a cream/light yellow bar code field with two bar codes in it, and the smaller bar code says “51695”. The dust jacket back also has a single quote from the Guardian saying Harry Potter could assume the near-legendary status of Ronald Dahl’s Charlie, of chocolate factory fame. The item “Harry Potter Sorcerers Stone FIRST EDITION 1st Impression DJ 1998 Guardian” is in sale since Saturday, April 24, 2021. This item is in the category “Books\Antiquarian & Collectible”. The seller is “labb1279″ and is located in Baton Rouge, Louisiana. This item can be shipped worldwide.